So you have grown, harvested, dried, bucked, and extracted your hemp into CBD oils. The next step is to dewax, remove any solvent, and then distill the oil to turn it into a beautiful golden oil. However, as you start to distill the oils, you notice that instead of a beautiful, clear, golden color, your final product is an unsightly dark brown. Further, the production rate is not very good.

How to optimize distillation methods for clarity and quality

Distillation methods must optimize throughput, color and clarity in order to be successful. Throughput is how much the distillation equipment will produce per unit time. Clarity is a measure of the oil’s opacity and transmission. Color is how the eye perceives the absorption and reflection of light of an object.

To optimize distillation, many different temperatures, vacuum, flow rate, and angular velocity must be addressed. Likewise, troubleshooting of the same systems also addresses these key method variables. The following table summarizes the root causes, resulting oil, and also suggests a solution to help solve the problem.

Is your distillate dark? We can help.

Let’s focus on dark distillate first. As is shown in table 1, dark distillate can be caused by inadequate solvent removal, inadequate decarboxylation, high inlet flow rates, or poor still maintenance. An example of this problem is shown in Figure 1. The oil on the left is dark and clearly potent as is indicated by the crystals forming on the side of the jar. In contrast, the oil on the right is light yellow or amber in color and semi transparent giving much better clarity and also commanding a much better market price. 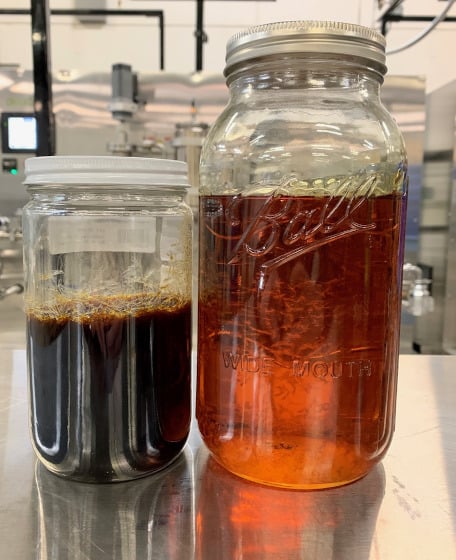 How to avoid discoloration

All discoloration boils down to a couple concepts. First, the inside wall of the wiped film evaporator is very hot and the fluid that is being wiped across the surface must not sputter, splatter, splash, or drip.

What does cooking bacon have to do with troubleshooting wiped film evaporators?

Splattering in a wiped film or thin film evaporator are not unlike the splatters encountered when cooking bacon or hamburgers. When cooking bacon for example, water droplets to the hot oil may be introduced by adding uncooked bacon or perhaps water that was absorbed to the pan prior to heating up the bacon.

As the water encounters the hot oil surface, it begins to heat up and simultaneously sinks into the oil since water is more dense than oil. As the water sinks and the oil is 100°C or greater, the water will start to boil. This can happen very rapidly if the oil is much hotter than the boiling point of water. Upon boiling, the liquid undergoes a phase change and turns into a gas. As the gas expands through the oil, the hot oil splatters all over the cook and burns anyone who is in the path. Ouch.

Splattering in a wiped film caused by boiling solvent

These four facts set up a situation similar to bacon splattering. As the material is pumped into the still and is wiped across the surface forming a thin film, the solvents entrained in the oil begin to flash off and splatter, carrying with it dark winterized oil. This dark oil lands on the cold finger and makes the resulting distillate oil darker.

Therefore, when crude oil is produced with hydrocarbon or ethanol extraction, it is critical to remove as much of the remaining solvent as possible. Any solvent materials that are left behind can cause a discolored, contaminated or diluted product.

Flash evaporation could be harmful to your health

So, before the process of distillation begins, the distillation pre-process needs to be spot-on or the distillate could be contaminated and result in potentially harmful side effects for the user. The remedy is clear in this case: make sure all ethanol and solvents are removed prior to distillation. To do this, you will need to cook the heck out of the extract.

Decarboxylation in the context of hemp processing is the process of converting the acidic form of CBD to its neutral form according to figure 2.

As the scheme shows, heating an oil containing CBDA, the acidic form of CBD, will evolve CO2 and convert the acid form into a neutral molecule. If a significant amount of the bulk oil is evolving CO2 gas in the thin film, it could produce splatters along the column.

The kinetics of evolving CO2 is much slower than boiling an entrained fluid therefore bubbles due to decarboxylation are expected to be further down the wiped film column compared to rapid evaporation of a low boiling solvent that is expected to occur at the top of the column.

There may also be other compounds in the oil such as terpenes that may react at high temperatures under vacuum to release water or other gasses. Either way, the remedy is obvious: Decarboxylate prior to distillation.

Since distillation is much faster, wiped film equipment is generally considered a more gentle way to distill an oil. The time that the oil experiences exposure to high heat is short, so many reactive compounds do not have time to react and degrade the residue or distillate. Typical residence time in wiped film equipment is on the order of minutes.

In contrast, a short path uses a round bottom flask and a heating mantle. The time that the oil spends heating in that flask can last well over an hour thus providing both the energy and the time for side reactions and degradation to occur.

Splashing in wiped film equipment caused by the wiper blade

The rotating wiper blade can also potentially be a cause of splashes if the blade is out of alignment or installed improperly. Misalignment of a wiper causes an uneven film and can also cause build up and pools of oil that tend to splash in random directions when the oil drips. If the wiper blade design does not incorporate “fingers” and is solid, oil is more likely to build up on one side of the blade. This may cause drips which can lead to splashing. Thus, wiper design is also key to a well functioning wiped film evaporator.

A wiper blade can also cause problems if the angular velocity is too high. Keeping the RPM at reasonable value is critical to optimizing throughput, color, and clarity of the oil. One thing to note is that many manufacturers including clearSTILL offer wiper designs that incorporate shields to prevent splatter or splashes. This is a good idea when incorporated with the preventative measures discussed above.

A helpful tip for troubleshooting wipers

One way to troubleshoot the wipers is to use a fluorescent dye in some test oil that mimics the viscosity of hot winterized CBD oil. Feeding the still with this oil at your method flow rate and RPM will tell you if the unit is unintentionally splashing. All you need to do is run the unit under method conditions, disassemble and inspect the finger under UV light. Any splashes will show up on the “cold finger” as a streak of fluorescent oil.

High throughput in your short path distillation kit, falling film evaporator, or thin film evaporator is essential to make the most money per unit time. However, there is an optimum amount of material throughput that will directly impact the quality and clarity of the distillate produced. Throughput is mainly controlled by inlet flow rate. As we will see below, flow rate can also impact color and clarity.

At a low input flow rate and given RPM, the wiper blades are not overwhelmed with material and will create a uniform thin film to be evaporated. This condition is good for eliminating splashes and will also give a great color and clarity to the oil. The trade off is poor throughput.

As the flow rate increases, throughput improves. However, while holding the same RPM, eventually the wipers will be overwhelmed and drips and splatters occur. This will compromise color and clarity.

Wiper blade RPM can be increased to accommodate increased mass flow rate but only up to the point that splashes start to occur. No matter what, figuring out the precise balance of operating conditions will create a clearer, more potent distillate by the end of the process.

A pure CBD distillate is reliant on more than just the molecular distillation process. A quality product is only as good as its source material. This means starting with marijuana or hemp plant material high in cannabinoids and terpenes is essential. One key issue we have found related to color is that the more hemp seed, stalk and fan leaf in the biomass, the more likely it is that the distillate will be dark.

Temperature and vacuum pressure must be dialed in to near perfection for any thin film distillation. The thicker the film, the harder it is to remove desired volatile CBD cannabinoids from residual byproducts like terpenes and remaining solvents. Most short path distillation equipment requires two separate passes. Wiped film evaporation is similar. Typically, the first pass is to remove byproducts like ethanol that has a boiling point of 78.2℃. Without proper vacuum distillation to lower that boiling point, a larger quantity of ethanol will remain and create an impure and discolored product after the second distillation pass.

If trial and error continues to show a final product that is a dark, undesirable color, it may help to re-run the distillate one more time specifically for the purpose of clarity. Temperatures and vacuum pressures may be altered slightly compared to the first or second pass to identify exactly what the purified product needs to become clearer.

How the clearSTILL 400 compares to alternatives

extraktLAB’s clearSTILL 400 has distillate clarity down to the highest level of precision. Where standard distillation equipment requires multiple passes, each in a separate cycle, the clearSTILL 400 is capable of two passes in a single contained cycle. This means that contamination risk from transfers between passes are eliminated and further increases the chance for high clarity and potency. 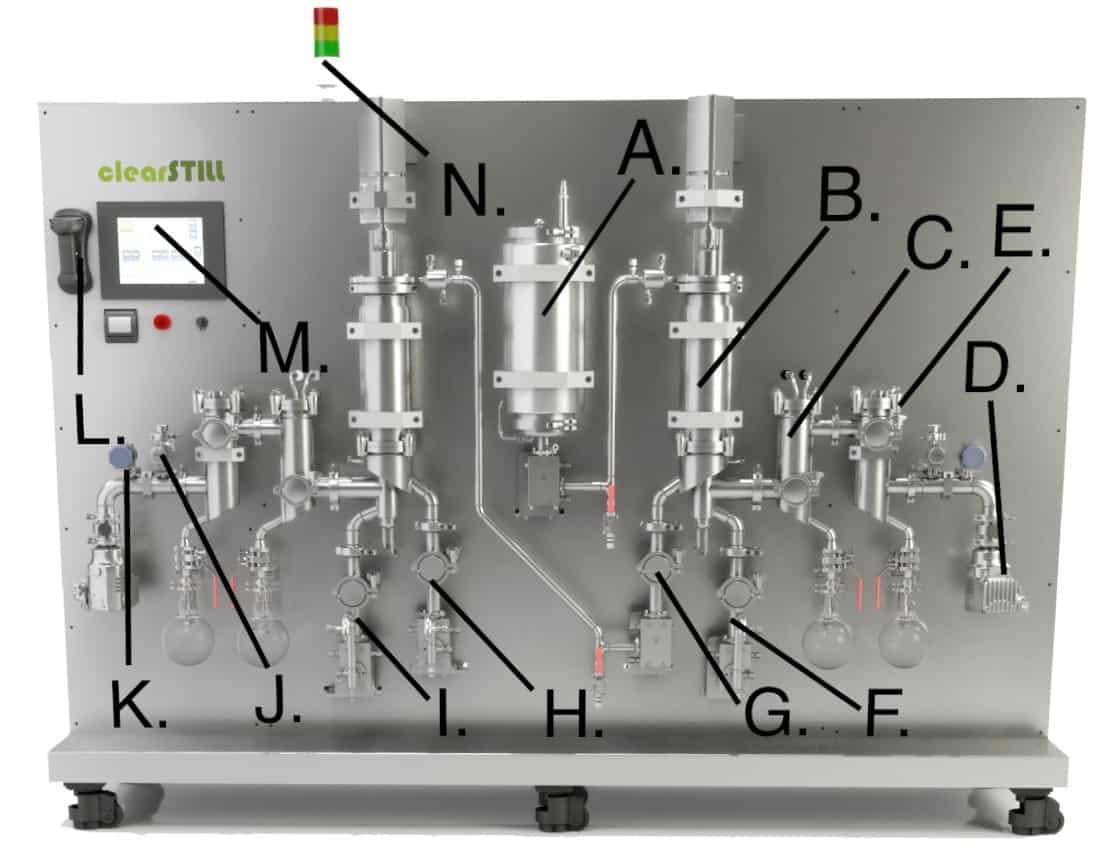 Not only will the dual-stage system of the clearSTILL 400 increase the likelihood of a quality product with increased clarity, it is capable of producing double the volume of single stage systems at 4-6 L/hour and drastically decreasing labor costs.

Because the clearSTILL 400 is a wiped film evaporator, it is designed to handle fluids of a higher viscosity. This becomes important in the case that a “re-run” of a distilled product is needed for the sake of increasing clarity. Where traditional short-path equipment might struggle, the clearSTILL 400 will easily handle the product as viscosity increases.

The clearSTILL 400 also uses a unique vacuum pump system that is oil free. Other vacuum pump systems typically use an oil ring that creates a proper seal. While this may create a proper vacuum seal, this makes it possible for volatile components that don’t condense to follow the flow of vapor and contaminate the lubrication needed to operate. This leads to necessary disassembly, production downtime and risk for product contamination.

Like all extrakLAB equipment, the clearSTILL 400 is GMP compliant with maintenance tracking, continuous containment between stages, and certified wetted materials that support global market requirements. It’s the “clear” choice when it comes to hemp distillation.

Clarity is typically indicative of quality in the hemp concentrate market. This means that if you end up with a dark, or less translucent end product, you likely need to figure out your clarity for the sake of customer satisfaction. Lucky for you, the solution may not be as hard as you would think.

We’d love to help you pursue the exciting and most cost-effective opportunities available in hemp extraction today! Please call us at 651-600-0036 or submit an online form for more information. Interested in learning how to master the extraction lab startup? Read more here!