Distillation and evaporation are critical aspects of the hemp and botanical extraction industry. Without it, the capability to create a highly potent, pure and safe distillate for product formulation is sacrificed.

In order to do this, there are a number of technologies and equipment to perform the task. In this article, we examine different designs for achieving thin film evaporation in evaporator equipment.

We discuss the key aspects to efficient evaporator design and wrap up with recommendations for comparing distillation systems incorporating various evaporation equipment.
To get started, it is useful to review some definitions:

Evaporation is the process of changing a liquid into a gas. Evaporator equipment is typically designed to produce a thin film on a heated surface so that solvents will volatilize quickly and efficiently.

Condensation is the process of changing a vapor or gas into a liquid. The liquid in this case is called a condensate. The term thin film is also applied to a condenser because as condensable vapor gas encounters a cold condenser, a thin condensate film forms automatically. Careful engineering of the condensation path is a key aspect to the overall distillation process. The thin condensate film is typically removed by gravity.

Distillation Systems and Distillation Equipment will typically incorporate both an evaporator and a condenser so as to provide a separation between the evaporated fluid and condensate.

Processing botanical extracts often requires careful consideration of the evaporator design. An evaporator is a piece of equipment that is designed to remove selected volatile components from a fluid. Selectively removing solvents from fluids is accomplished by controlling temperature and pressure of the fluid and also the evaporator and condenser design.

Thin-film evaporators are popular within botanical industrial processing because they are specifically designed to evaporate volatile solvents from heat sensitive products. Oftentimes, botanical extracts can be thermally labile and therefore are susceptible to degradation.

The word thin film refers to the process of coating the solution to be evaporated into a thin film on a heated surface. The thinner the film, the better the heat transfer and the better the mass transfer and therefore the shorter the time for evaporation. Short times for evaporation help preserve the Integrity and consistency of heat sensitive products.

In order to get a thin film, the evaporator system must be designed carefully. For example, some viscous extracts or slurries require rotors and blades to spread a thin film on a heated surface. Less viscous products may not need complicated apparatus to obtain a thin film. 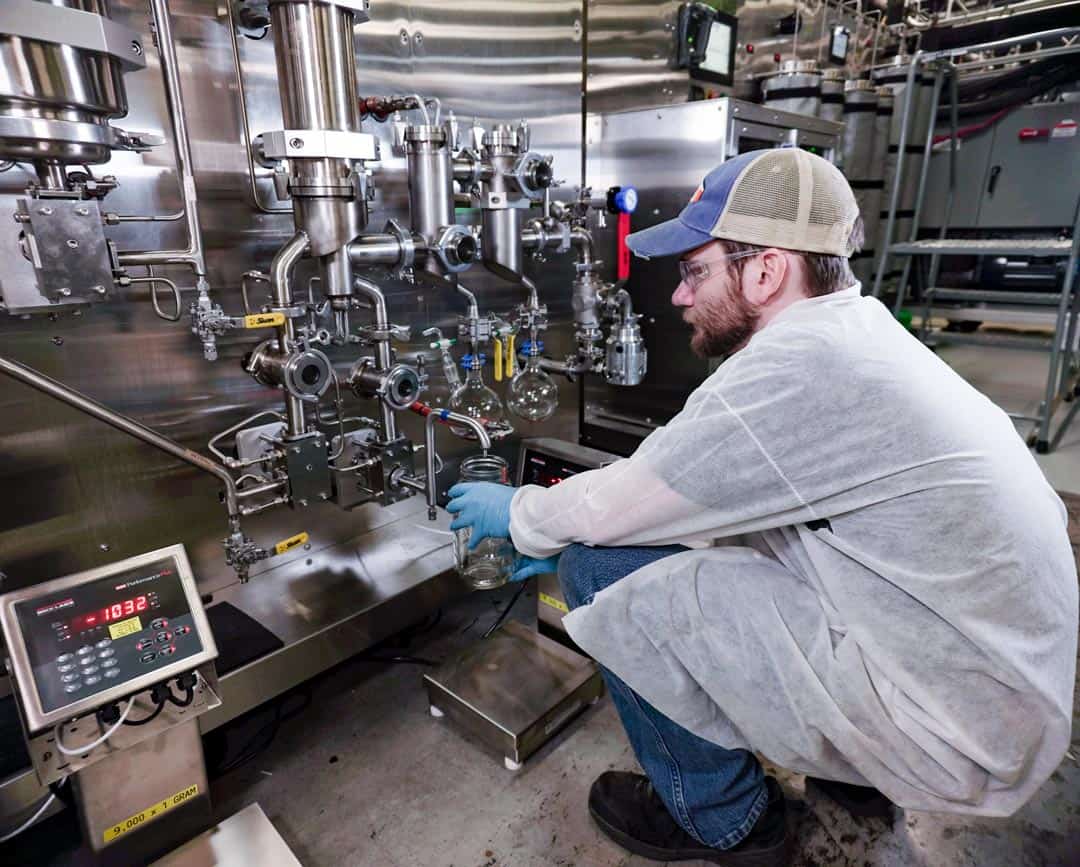 Evaporator Design Types That Will Create a Thin Film

Wiped film evaporators are typically used with highly viscous fluids or slurries that will not readily form a thin film on a heated surface.

Since the thin film is in direct contact with the heated surface, volatile components will evaporate from the surface into the area above the thin film. Typically this space is a vacuum  so that the evaporated molecules can move relatively unimpeded to the condenser. The molecules that volatilize then migrate under a chemical potential to a condenser.

Designed for thick fluids, a wiped film evaporator is a key component to a distillation system and is widely used for chemical processing. Ranging from pilot to industrial scale, wiped film equipment is essential for any botanical industrial processing operation.

Shell & tube evaporators, on the other hand, do not use a wiper blade to obtain a thin film.

A falling film evaporator is comprised of a bundle of parallel tubes that are welded together at each end. The tube bundle is encased in a jacket that allows heat transfer fluid to be pumped across the outside of the tubes. This type of evaporator is also known as a shell and tube evaporator.

As the solution is heated, evaporation of the volatile components occurs and the vapor is then conveyed away to a condenser. Removal of the vapor to the condenser can be accomplished  with a convective gas or by diffusion alone.

Falling film evaporators are designed to distill free flowing extracts that will readily coat the inside of a tube under gravity without globbing up, bridging, or otherwise blocking the tube. This tube blocking is referred to as fouling.

However there is a natural lower limit to the tube diameter. As the tube diameter decreases, the likelihood of fouling or bridging will also increase. So the inside diameter of the tubes must be small enough to provide sufficient surface area for the evaporation capacity and also large enough to prevent fouling.

Designed for free flowing fluids of low viscosity, a falling film evaporator is a key thin film evaporator for chemical processing. Pilot scale multi-stage systems are common so it is important to assess the unit operations in your industrial processing operation and engineer the evaporator accordingly.

Starting an Extraction Business? Check out our Calculators and to analyse costs, estimated revenue, yield, initial investments and important metrics for your extraction business.

When the liquid to be evaporated is fed into the bottom of the exchanger, the liquid immediately encounters the hot tubes that make up the vertical shell and tube heat exchanger. As the volatile components start to boil, the vapor starts to rise through the tube pulling the liquid along with it. Since the upward velocity of the vapor is higher in the center of the tube, liquid that has not yet volatilized is pushed against the tube wall forming a thin film.

Rising film evaporator equipment is used in many different Industries including the food and beverage industry and is specifically advantageous for fluids that are heat sensitive or are prone to scale or foaming.

One of the key design characteristics of a rising film evaporator is engineering the temperature difference between the heat transfer fluid and the boiling liquid. It’s important that there is a high enough differential so that the liquid will be forced up into the tube to make a thin film. 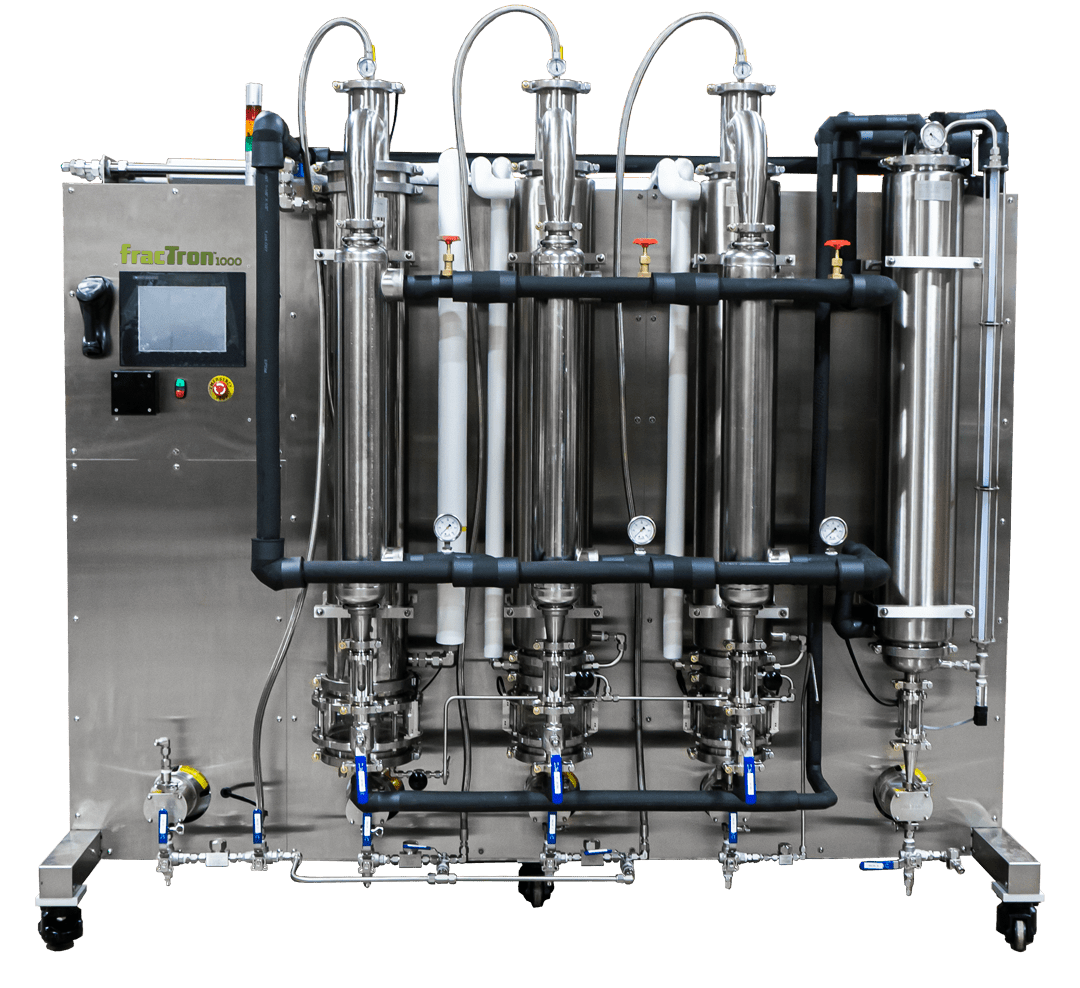 Material characteristics that are important to consider include the following:

In terms of thin film evaporator design, obviously corrosion resistance and chemical compatibility are of great importance. This means that material identity is extremely important. Typically the manufacturer will provide certifications as to the material identity if you request it before the equipment is fabricated. For highly corrosive applications, different materials may be selected that balance the heat transfer coefficient and chemical compatibility.

In practice, most of the operators are constructed and welded from 300 series stainless steel that has been passivated and finished on the surface to the desired specifications to prevent carryover. 300 series stainless steel is advantageous over polymer designs due to the high heat transfer coefficient of metals, wide range of chemical compatibility, absence of extractables and leachables and favorable surface tension.

Replace Your Rotovaps with fracTron Today

Evaporators are typically designed for specific applications. Evaporators may be concatenated into multi evaporator systems to achieve the desired performance objective.

There are many different features that are important to consider when purchasing an evaporator system. Typically evaporators are custom designed for the application. However, there are many pilot scale systems on the market that allow the user to help define the appropriate evaporator combination.

There are several different kinds of evaporators that are used to remove solvents and volatile liquids from products. Evaporator design is extremely important to obtain an efficient evaporator and also an efficient distillation system. The ability of the evaporator to create a thin film on the surface is a key aspect to overall efficiency. Evaporators must be designed to resist corrosion, maintain compatibility with the chemicals that are used within the system and also provide a high degree of overall heat transfer. Finally, systems should be selected based on the ability of the manufacturer to service the equipment and also provide automation, methods, and maintenance protocols to the customer. pilot skill systems are often available to show efficacy for a particular application.

Ask a Cannabis extraction expert about the right products and equipment for you to use for your extraction business.

Get started with our live tour today!

Get Started with our Live Product Tours

Understand more about CO2 Extraction through our FAQ’s and extensive Hemp Processing article and guides.

Can rotovaps be replaced with a falling film evaporators?

One of the advantages to the FracTron is that it can be configured in several different ways to give it more versatility. It can be used as a 3-stage fractional distillation piece of equipment or it could be used also as a two-stage falling film evaporator and one stage decarboxylator unit for decarboxylation of oils.

Since the fraction is able to condition the oils in such a way that they can be introduced directly into a wiped film evaporator, the unit is capable of being fully integrated and automated to feed a wiped film distillation unit.

Can I feed my ethanol/extract mixture directly into the falling film?

Yes, the system is engineered to fit directly into any batch or continuous extraction process.

How does the fracTRON help reduce maintenance and automate cleaning?

The fracTRON is a continuous system, it doesn’t require disassembly between runs. When it needs to be cleaned, simply run the system with clean ethanol at 50C (in all columns). If inspection is required, remove the top two clamps to swab the surfaces.

How do you clean the fracTRON?

The system is cleaned by flushing with clean ethanol. The fracTRON has a piping manifold for even distribution of the liquid mixture which also helps to force cleaning solvent into potentially clogged tubes. The apparatus is easily disassembled for inspection.

Can I collect distillate from different stages independently?

With an optional piping package, yes. Having the ability to be set to 3 different setpoints throughout the system, select components can be evaporated and collected preferentially. This is particularly useful for industrial fractioning of terpenes.

Does the system come with methods?

Methods and formulas are delivered with the system.

Is degassing required after treatment with a falling film?

Depending on the operating conditions, degassing is still required after subjecting the extract/ethanol mixture to falling film evaporation. Degassing decreases the ethanol content of the mixture from ~10-15% from the evaporator to 2% which is required for wiped film evaporation. The time it takes to degass is largely dependent on the starting ethanol content as well.

What yield should we expect from the falling film evaporators?

What is the surface area of the unit and how does that impact throughput?

How does a falling film fit in my workflow?

Ethanol is the most common solvent for removal of fats and waxes from a plant extract and it needs to be removed from the mixture for downstream product refinement. Ratios of ethanol/winterized oil are typically between 4/1 and 10/1, high capacity falling film evaporators are necessary for large scale removal of ethanol from plant extracts.

Are solvent residuals still left in the oil after distillation?

How clean is the ethanol coming from the falling film still?

Purity of product depends on many things such as temperature and flow rate of the heated media, flow rate of the liquid mixture to be distilled, pressure of the system, surface area of the heated surfaces, and mechanism of vapor-liquid separation. Depending on these conditions, most falling film evaporators remove 80-95% of ethanol from the starting mixture.

What does a falling film evaporators do?