pure99 Chromatography vs CPC vs SFC

In this article, we sit down with separation scientist and extraktLAB CEO, Dr. Jon Thompson, to discuss the pure99 high-performance liquid chromatography system and how it compares with centrifugal partition chromatography (CPC) and supercritical CO2 as an eluent.

This guide compares and contrasts the techniques of each system based on plate count, analyte solubility, injection solvent, stationary phase, eluent characteristics, eluent type, and solvent recovery and recycling.

Our goal is to always be the authority you can turn to when you need information about the hemp industry. Contact us at any time with questions, quotes on our equipment, or for training and consultation.

Want to hear the entire conversation? Click the video below to listen to the pros and cons in full detail.

An Overview of the pure99 Chromatography System

The pure99 chromatography system is a traditional chromatography platform designed to separate and purify individual components of a blended solution. The separation utilizes the pressure-driven ﬂow of a mobile phase through a ﬁlter media packed column with the stationary phase.

Separation is inﬂuenced by factors such as mobile phase components, stationary phase chemistry, and temperature. The versatility of pure99 preparative chromatography makes it possible to change diﬀerent selectivities to maximize eﬃciency in your botanical extraction process.

There are two processes for separation:

When determining your strategy to get an isolate, you should consider solvent usage, reusability, and the number of systems involved.

The pure99 system has built-in recovery and recycling of solvents. Since both processes are contained in one instrument, it reduces the number of solvents used daily and the separation costs. 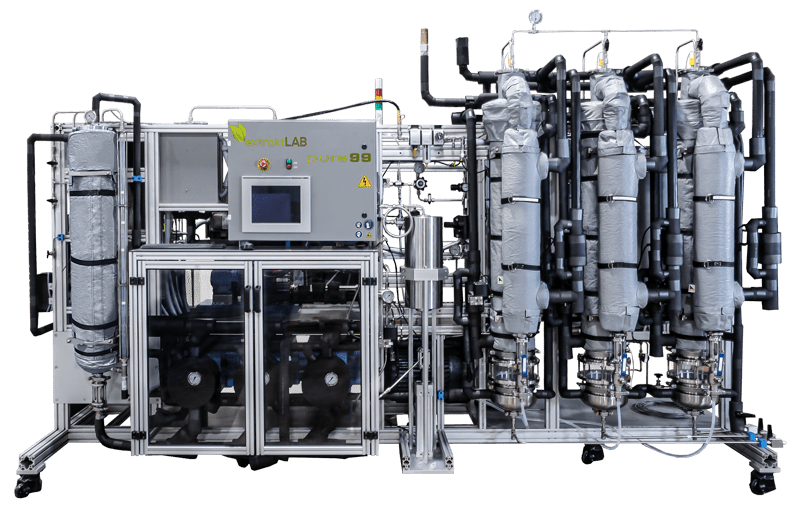 What is a pure99 chromatography column?

In science, a chromatography column is used to separate a single chemical compound from a mixture dissolved in a ﬂuid.

The extraktLAB pure99-z is a premier preparative chromatography system for
the separation and research of hemp and cannabis extract products. It uses smaller columns (up to 4) with a maximum ﬂow rate of 1 liter per minute.

In comparison, the pure99-x has built-in solvent recovery and a tri-phase pump with an 8-liter per minute capacity. The pure99-x allows for multiple sizes ranging from 3L column and 14cm ID to 12L column and 20 ID. This leads to greater load ability, less tailing, better eﬃciency, peaks, scale-up, and versatility relating to particle sizes.

Comparison: Pure99 vs CPF vs SFC

So, we’ve touched base on the pure99 chromatography system and the chromatography column. Now, let’s explain the fundamental techniques of CPC and SFC.

What is Centrifugal Partition Chromatography (CPC)?

Developed in 1907, CPC is an old technique based on the principle of liquid-liquid partitioning and is often referred to as countercurrent chromatography (CCC). In CPC chromatography, the separation occurs as a mobile phase elutes the mixture and ﬂows
through a stationary phase that is immobilized in the CPC’s rotor by the centrifugal force.

The separation potential of the mixture is a result of the CPC rotor. The rotor consists of a series of plentiful microcells. As the rotor spins, it emulates liquid-to-liquid partitioning similar to a separation funnel. When repeated hundreds of times through the ﬂow path, it produces a centrifugal force keeping the substance in place.

What is Supercritical Fluid Chromatography (SFC)?

SFC is a separations technique similar to gas and liquid chromatography but uses carbon dioxide (CO2) as the mobile phase. A supercritical ﬂuid can be considered a “dense gas”.

An advantage of SFC, when compared to other techniques, is the sustainability of the CO2 eluent. Furthermore, in terms of cost, SFC is cheaper to operate.

We’ve covered the techniques of CPC and SFC systems, now let’s compare parameters for diﬀerences in each chromatography system and see which option is the best overall.

First, let’s talk about the solubility of the analyte in the injection solvent eluent or liquid stationary phase. Just like traditional chromatography, pure99 has full control over

injection solvent. It can be modiﬁed to adjust the strength of the eluent in the stationary phase. Furthermore, it oﬀers incredible opportunities to optimize the injection proﬁle.

The limited solubility of the analyte in CO2 is a disadvantage for SFC. It takes a signiﬁcantly longer time for the analyte to dissolve in CO2 once it is in the column. This leads to a large tail and ruins the eﬃciency of the chromatography.

In comparison, CPC injection solvent must be immiscible with liquid stationary phase solvent and miscible with eluent. This means, there is an extra method development parameter.

When making a buying decision for a piece of laboratory equipment like a preparative chromatography system, it may be tempting to invest in a single function system, or a “one-trick pony.”

However, problems occur when you want to use the equipment for additional separations. Then you are forced to spend more on multiple systems, each with limited functionality.

Having the ability to manipulate variables for a wide range of applications is vital. pure99 chromatography systems enable a signiﬁcant advantage in terms of versatility,
optimization, eﬃciency, and throughput. On the other hand, CPC and SFC work for limited select applications.

In the versatility of the eluent type, any common reverse phase, normal phase, and IEX phase are acceptable. On the contrary, the eluent type in CPC must be biphasic with the liquid stationary phase.

In other words, they can’t be miscible with one another. It becomes challenging to address diﬀerent types of eluent and separation goals because of the limiting variable.

One key beneﬁt of SFC is that it has a low viscosity. Since the diﬀusion coeﬃcient of the analyte in the mobile phase is high, the exchange is equally high when it is dissolved. Still, CO2 has limited solubility for many polar modiﬁers such as water and ethanol.

In the pure99 chromatography system, you have the full range of gradients of any solvents, as long as they are miscible. This is a major drawback for CPC because it isn’t practiced due to the loss of stationary phase in the gradient.

Alternatively, co-solvents are limited in solubility in CO2. Gradients are also shallow as they become biphasic.

What is Eﬃciency (plate count)?

Column eﬃciency, also known as plate count, is a measure of the dispersion of a peak. It is directly proportional to the length of the column (L) divided by two times the particle diameter (DP).

This means if all the variables in the eﬃciency equation are held constant except for the plate number (N), the result is proportional to the square root of the number of the theoretical plate.

Two factors determine eﬃciency: peak maximum and width of the peak. Narrow peaks take up less space in the chromatography column, thus allowing better quality of peaks to be separated.

For high-eﬃciency separations, the number of plate counts (N) is high, and the plate length (L) is low.

Generally, people use more eﬃcient columns to avoid generating many plates that exceed the separation requirement. In SFC, diﬀusion coeﬃcients are large and favorable in the CO2.

Since the viscosities are low, you use small diameter particles like the pure99 system. However, it must use very large ID columns for loading due to solubility issues and extreme tailing in the preparative work.

CPC has a diﬀerent type of equation for eﬃciency that heavily depends on the number of transfers and distribution coeﬃcient. You don’t have the column length or versatility as means of calculating eﬃciency. This means the eﬃciency and theoretical plate are the numbers of separation stages.

For example, if you have 100 stages on the rotor, then your plate count is 100. A limitation to this is that plates are limited by the number of separation chambers with the rotor you purchase. So, to get higher eﬃciency, you need a larger rotor.

The main diﬀerence between SFC and the pure99 is that the shallow gradients and lack of eluent solubility often require the deployment of expensive stationary phases to get selectivity, the pure99 mitigates those concerns.

Oftentimes, there are multiple processes, setups, and valuations involved in solvent handling, solvent losses during transfer, and inventory. Having them contained in one instrument makes the processes easy and continuous.

With pure99, you have full recovery and recycling of solvents online. Thus, you’ll get great beneﬁts at a low cost.

The pure99 system requires slightly more work to carry out method development and separation; but it provides great dividends in terms of cost of separation when compared to CPC and SFC.

If you want an economical system that works perfectly, SFC is the lowest operating cost method. The solvent is also more sustainable than a condensed solvent.

However, cleaning and carryover can be a challenge. There are also issues with cryogenic gas which requires advanced equipment, chillers, and compressor pumps for recycling.

CPC requires multiple operations to remove the analyte from the liquid stationary phase. Unlike pure99, it relies on an oﬄine solvent recovery method.

We’ve covered the basics of what pure99 is including the technique explanation of pure99, CFC, and SFC, and their comparison parameters.

Now, why is pure99 a better option than CPC?

Why Not SFC or CO2 as a Chromatography Solvent?

As we’ve illustrated, extraction is much more beneﬁcial in the long run, both in environmental impact and sustainability. Still, there are limitations with CO2 as a solvent we cannot ignore.

Here’s why SFC is not the best chromatography system:

The pure99 chromatography column and system is the preferred technique for
separation and puriﬁcation of botanicals. It has set demanding standards for versatility, solvent recovery, production outputs, and separations. For these reasons, extraktLAB chooses to utilize this separation method and urges others to do the same.