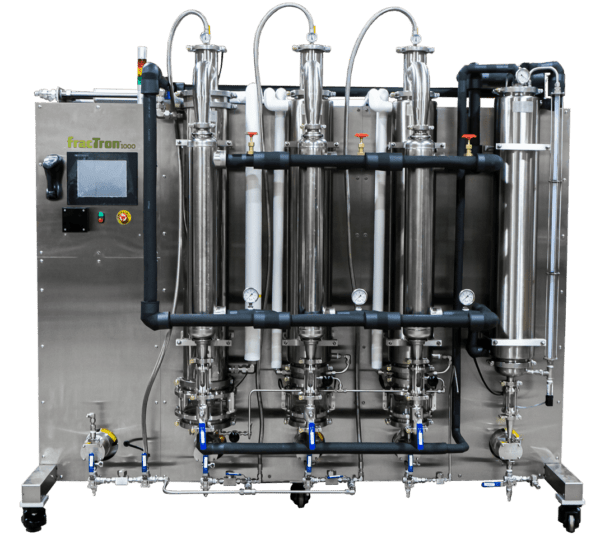 Clarity and potency are important to consumers in search of products made from pure cbd distillates and isolates. However, businesses who produce these products have many additional factors to consider in the hemp extraction process.

Throughput, cost, scalability, quality of the product, maintenance, automation, GMP compliance and overall efficiency are just a few of the things that producers need to scrutinize when considering equipment for molecular distillation.

In this article, we compare and contrast the different thin film distillation techniques that are in widespread use to produce CBD distillate and show how wiped film distillation is a clear winner for scalable, GMP operations.

1. Wiped film distillation and SPD can both be glass and therefore have the same robustness. Stainless versions of either will obtain a better rating.

As the table shows, the key advantages of wiped film technology is that it preserves the product, is more efficient, is continuous, and is also scalable.

Short path distillation on the other hand is a batch process that does not scale very well because it is slow and is known to degrade the product within the still.

The clearSTILL 400 distillation machine is an innovative wiped film molecular distillation technology that is built on the foundation of a wiped film still but adds many of the features that operators and manufacturers need to make their systems compliant, more efficient, and more automated.

Let’s get into more details. The following discussion seeks to explain the basis of the comparison and provide insight as to when a short path apparatus shines and when wiped film equipment is more desirable. We will first examine the similarities of the two techniques.

Distillation techniques have been used for years in botanical extraction and commercial industries. In fact, the essential oil industry has been using this technology for many years before the 2018 Farm Bill allowed for the legal extraction and distillation of CBD from hemp. In both industries, the process is very much the same.

First, a word about terminology. Most laboratory glass based “short” path apparatus that are on the market today are mislabeled. Since the condenser is external to these units, they fall out of the definition of what is considered a short path. Since the entire extraction industry uses this vernacular, we will too; however, outside of the industry, the term “short path” may mean something different.

Short path and thin film distillation equipment operate in a similar fashion to separate liquid mixtures through differences in boiling points. Though their methods are different, both wiped film and short path equipment both will produce clear, light yellow distillate with potencies ranging from 60-90%.

To decrease boiling point temperatures, both equipment styles utilize vacuum. By decreasing pressure, vacuum distillation lowers boiling points and avoids prolonged exposure to the heat source. This prevents the chance of damage to desired materials during the evaporation process and avoids the production of degradation or isomerization byproducts. Coupled with the creation of a thin film, molecular distillation allows producers to create a potent, clear distillate that is rid of extraction solvents.

Though both of these processes are essential for a quality extract product, and are similar in concept, short path and wiped film both have different advantages and disadvantages. The following table is an annotated comparison of the features, pros, and cons of the techniques and equipment.

We have the perfect machine for small, medium and large producers. Our model line makes it easy for you to scale your operations while keeping your operating costs at a minimum.

As is shown in the table, wiped film distillation has many key advantages but short path equipment is not without its unique characteristics. As with any production technique, there are always trade-offs.

“Short path distillation equipment is laboratory glassware apparatus whereas wiped film equipment is made for an industrial setting and can be deployed in manufacturing operations.” – Dr. Jon Thompson

An advantage that SPD has over WFD is that it can do a better job at creating a clear distillate with a lighter yellow color. It also has the ability to fractionate whereas WFD is not really set up to do that. The other key advantage is one of cost. A SPD unit can range from $200 – $20,000 USD whereas WFD units start around $100,000 USD.

The key advantages that WFD has over SPD are scalability, product consistency, throughput, automation, GMP compliance and continuous operation. This is why many manufacturers choose this kind of equipment to deploy in their operations

As is shown in Table 1., clearSTILL 400 wiped film technology is highly advanced compared to state of the art wiped film distillation equipment. The technology employs automated methods, maintenance free vacuum systems, data logging and mass flow monitoring for better consistency and control of the end product. However, there are many other advantages.

This creates a bottleneck in production and risks contamination, or product waste between transfers. With dual stills capable of a continuous process throughput of 4-6 L per hour, the clearSTILL 400 is capable of doubling throughput and halving labor costs compared to single stage systems.

extraktLAB clearSTILL-400 distillation machine is a dual-stage wiped film evaporator capable of performing distillation passes in a single contained cycle. It is built on the foundation of the wiped film but adds many features operators and producers need to make their system GMP compliant, extremely efficient, and more automated.

Using traditional wiped film evaporators creates bottlenecks in the distillation processes. In addition, since each distillation pass is performed in a single, separate cycle, it opens the risk for contamination and product waste during transfers in your lab.

The advanced clearSTILL-400 technology has a programmable cleaning protocol that can be scheduled directly into the machine. This program addresses the issue of cleaning downtime in traditional wiped film equipment by reducing or eliminating contamination and missed cleaning cycles that create a high amount of waste materials.

We designed this product with GMP compliance in mind. It is GAMP and CFR Part 11 compliant, ensuring a quality control of end products. This puts the clearSTILL-400 above any distillation equipment. In addition, there is onboard tracking of the user, bath, calibration, maintenance, and barcode reporting via electronic and paper trail to improve data integrity.

Factors to Consider when Buying A Distillation Machine

Distillate has become a hot commodity among today’s consumers in the CBD industry. Distillation machines are highly sought after due to their high purity products. The extracts are also odorless and flavorless, making them the best form of distillate to use when creating edible products.

Purchasing a distillation machine can be an expensive investment. Throughput, cost, quality of the product, scalability, maintenance, automation, efficiency, and GMP compliance are just a few factors that producers need to consider when purchasing equipment for molecular distillation.

Many manufacturers compromise in order to keep costs low. While cost control is a consideration for any business, this is one area where you do not want to skimp. Cheaper equipment is appealing but can be more expensive in the long run due to its constant need for repairs or replacement.

Another important factor to scrutinize is the automation of the distillation unit. As we move into the future of hemp production technology, it makes sense part of the process is now being automated. For example, an automated distillate machine eliminates winterization, ethanol, and the filtration process and yields 15% more oil and 19% more cannabinoids.

You also will want to select the ideal vacuum pump. You’ll want a pump offering sufficient vacuum pressure and flow rate for an efficient evaporation process. This is to help you avoid safety concerns, pump damage, and solvent loss. When scaling up, a distillation machine using a continuous pump allows for higher evacuation rates.

Aside from choosing a continuous pump, a distillation machine should have built-in GMP compliance. This quality control enables companies to minimize or eliminate contamination, mixup, and errors. It also protects the end-user from purchasing a substandard product.

The clearSTILL 400 also addresses the standard issue of cleaning downtime compared to standard wiped film equipment. A programmable cleaning protocol can be scheduled directly into the machine. This negates the opportunity for missed cleaning cycles or contamination that could potentially create wasted material due to contamination.

There is a clear maintenance advantage for the clearSTILL 400. The equipment uses vacuum pumps that do not require oil for operation. Most vacuum pumps typically use an oil ring to produce a proper seal.

This allows for volatile components that don’t condense during degassing to follow vapor flow and contaminate the lubrication needed for the pump. This would require additional cleaning and maintenance – meaning more down time. Utilizing dry pumps, the clearSTILL 400 avoids that issue entirely.

The clearSTILL 400 is also designed with the GMP manufacturing operation in mind. On-board tracking of user, method, lot, batch, calibration and maintenance streamlines quality reporting. On skid barcode-enabled entry of meta data including batch and user data enable paper and electronic trails that preserve data integrity. GAMP and 21 CFR Part 11 compliant, the integrated data logging and archiving system puts the clearSTILL 400 a cut above its competitors.