Does your cannabis processing company use rotary evaporators for distillation and solvent recovery when making CBD oil? How many rotovaps do you need to use? What throughput are they capable of producing? Do you wish there was a better option? Good news, extraktLAB can help with a three-stage, falling film fractional solvent distillation system called the fracTron 1000.

No doubt about it, rotary evaporators are commonplace when it comes to ethanol extraction and simple distillation inside the cannabis industry. These evaporators are a form of short path distillation equipment that use a spinning round bottom flask (C), a vacuum pump (E), a heating bath (B), and a chilled condenser (A), to evaporate and collect volatile fluids into a receiving flask (D) as shown in Figure 1. 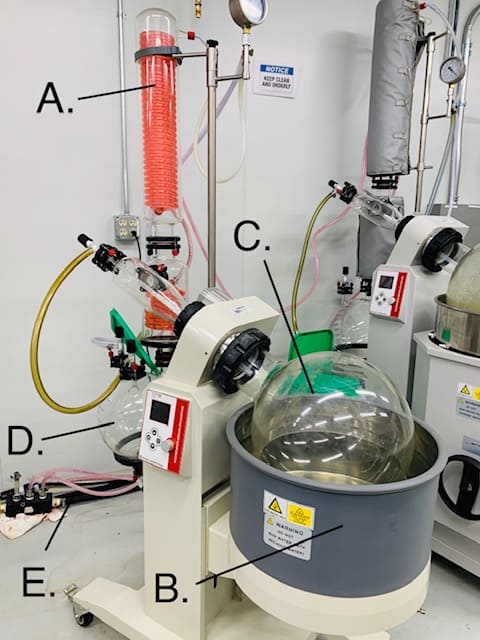 A mixture of winterized oil and ethanol is typically introduced to the round bottom flask which is then heated by the heating bath to vaporize volatile components from CBD oil. A thin film forms on the sides of the spinning glass that enables quick evaporation of the solvent. Once evaporated, the vaporized components are collected on a chilled condenser and conveyed away to a receiving flask.

Another method of solvent recovery and molecular distillation are falling film evaporators. Like typical rotary evaporators,a falling film apparatus has an evaporator and condenser and uses different boiling points to separate volatile components. A thin film improves mass transfer and speeds evaporation while a vacuum is used to decrease the boiling point of the target solvent. The key difference between a rotovap and a thin film is in how that film is created and how much throughput can be produced

In the case of a falling film evaporator there is a series of vertical bundles of metal tubes inside of a metal jacket. Those tubes are then heated to allow the ethanol oil mixture to flow down the walls to evaporate from solvents before collecting the solvent on a chilled condensation surface. As the name “falling film” implies, the mixture flows down the side of the tube to create a thin film for evaporation. Because of this, mixtures with a lower overall viscosity are most compatible with the fracTron while higher viscosity mixtures work best with wiped film evaporators like extraktLAB’s clearSTILL 400. However, the fracTron 1000 is well equipped for distillation of solvents at a very high throughput.

This brings us back to the first question: could the fracTron replace your rotary evaporators?

Both rotary evaporators and falling film evaporators are capable of distilling solvent at a relatively high throughput, but one shines through as the clear front runner. An average rotary evaporator will typically have a throughput rate of 5-10 L/hour depending on the size of the condenser and flask, vacuum level, and condensing efficiency. While overall throughput could be affected by a number of factors, this is a good indicator of comparison for the fracTron. 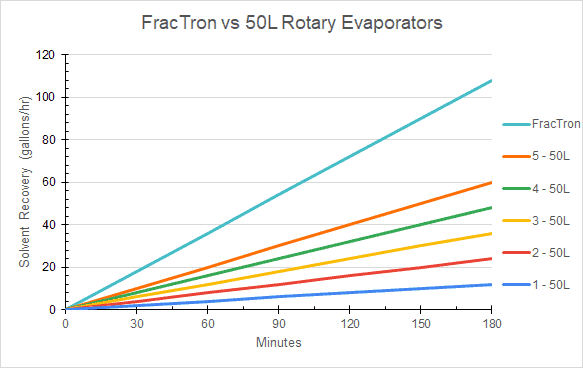 The fracTron 1000 is a three-stage fractional solvent system. Because of this, the throughput capacity it is capable of is roughly 40 gallons/hour in a continuous process flow. When compared to the throughput capacity of an average rotary evaporator, the fractron could potentially replace 5-12 rotary evaporators for cannabis distillate producers. If that wasn’t enough of an advantage, the fracTron has many more features that surpass other falling film equipment on the market.

As mentioned before, the fracTron 1000 is a three stage fractional solvent distillation system. This means it can support three independent fractional separations all with separate mass flow and temperature control.

With three stages, it becomes easier to remove the last remaining percentages of ethanol in the oil. Continuously increased temperature in each column highly increases the ethanol removal efficiency so that solvent will be evaporated completely. This will eliminate or greatly reduce any need for secondary processing.

With an optional piping package, the fracTron 1000 also allows the producer to collect distillates from different independent stages. With three setpoints throughout the system, specific components can be evaporated and collected depending on preference. This is very useful for the fractionation of terpenes for the ultimate in flavor and aroma. 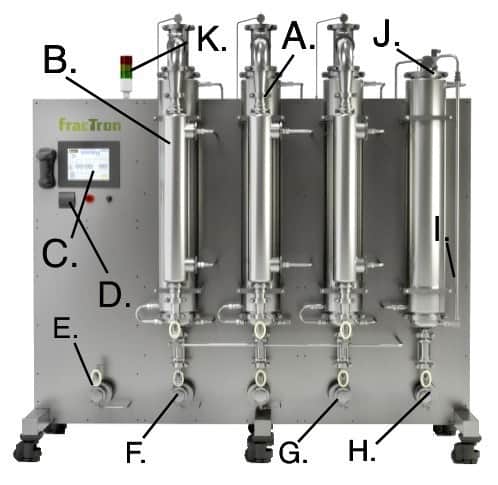 Because the fracTron 1000 is a continuous system, unlike a rotovap, disassembly is not required between runs eliminating downtime for cleaning. Clean ethanol can be pumped throughout all columns of the machine to clear the unit and validation can be accomplished by swabbing the surfaces.

What sets our equipment apart is the dedication to GMP compliance. Like our other equipment, the fracTron 1000 contains programmable methods, tracking, calibration and maintenance tracking, barcode-enabled paper and electronic traceability, VOC detector and alarms, and 21 CFR Part 11 compliant data integrity. These allow for maximum data integrity and streamlined compliance.

Rotovaps or rotary evaporators are used to gently remove volatile chemicals from nonvolatile oils. They are ubiquitous in the lab because of their versatility and ease of use. However, in production, scale up of this technology runs into several problems. Where those problems occur, extraktLAB’s fracTron 1000 addresses them and provides quality solutions to each:

So, the choice is up to you. Do you want to stick to your rotary evaporators, or take a step forward in creating pure CBD and cannabis concentrates? If the second option sounds like the right move, change the game with extraktLAB’s superior extraction equipment like the fracTron 1000.